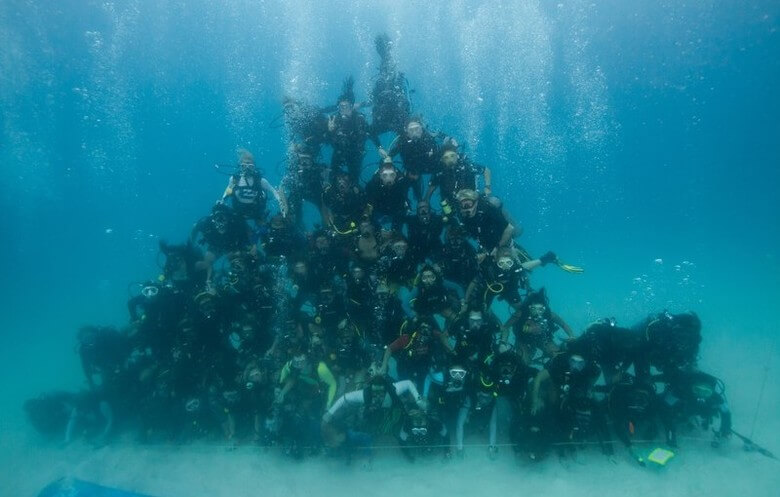 11 Scuba Records from the Guiness Book of World Records

The Guiness World Records book holds many different records, including some scuba diving related! Dutch Mermaid took the time to go through the book and found 10 interesting records obtained by scuba divers! 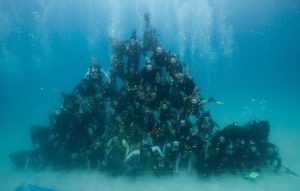 On the 15th of October 2013 there were 62 divers in Koh Tao Thailand that created together the largest underwater pyramid registered in the book. When researching more about this on the internet I also found an attempt in 2016 in Egypt with more than 100 divers, but no records if this attempt succeeded. Right now we’re assuming it didn’t as it’s not registered in the book.

Cem Karabay, also known as “aquarium man” from Turkey achieved this long and cold record in April 2018. The previous record was set by the Norwegian diver Nils-Roar Selnes who had an impressive record of 15 hrs and 10 minutes underwater in Norway (Eidkjosen).

Again Cem Karabay, also the cold water record holder, holds this record as well! But this time the record was set in Cyprus where the water is quite a bit warmer and thus making it possible to stay underwater longer. Almost 6 full days where spent on the bottom of the sea! Wonder if he brought a waterproof tv with him or something to stay entertained….

Now here’s a record we can all go train for! Underwater rope jumps! In 2012 the American Ashrita Furman did a total of 1608 rope jumps in one hour. Each full 360-degree revolution was counted as a skip. I’m going to be honest with you here, I couldn’t even do half on the surface! WOW.

Wallace Raymond Wooley from the UK has been achieving this record for 3 years in a row now! The latest being on 31st of August 2019, just 3 days after he turned 96. He completed a dive at the Zenobia shipwreck in Larnaca Bay (Cyprus). I wonder if Wallace will be able to beat his record again next year!

A very impressive record, set in Manado, North Sulawesi (Indonesia). The Indonesia Women’s Organisation (WASI) achieved this record on the 3rd of August 2019. Just a few days before setting this record they also achieved the “longest human chain underwater”. Another record they broke was the largest flag (1014m2/11042ft) unfurled underwater! 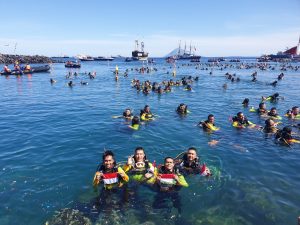 In 2014 Ahmed Gabr, a 41 year old Egyptian diver, achieved this insane record. He made the dive in the beautiful Red Sea, near Dahab. It took Ahmed ‘only’ 12 minutes to reach the record depth, however once he reached that he needed almost 15 hours to resurface again safely! Ahmed had previously spent 17 years in special forces with the Egyptian army, working as a dive instructor.

Using only a 12 litre scuba cylinder this record was achieved by the South African Jacobus Jacobs. Sadly there’s not much more information to find about this attempt such as the depth the dive was taking place or how much bar pressure there was on the cylinder (there is a fair difference after all in 200 or 300 bar!)

Forget having your hair and make-up done when you’re getting married on the bottom of the ocean, especially when it’s a crazy 130 meters deep! Sandra Smith and Hiroyuki Yoshida said “yes, I do” to each other at the Song Hon Lake in Trang Thailand.

Getting married underwater is gaining in popularity. In 2011 a whopping 303 people attended the wedding of Ewa Staronska and Pawel Burkowski in Poland at the Koparki Diving Base. The ceremony lasted about 18 minutes. The couple and the wedding priest communicated with eachother using water proof text and signals.

Dixie Divers from Florida organized a huge clean up event at Dearfield Beach, Florida, USA. A total of 633 divers showed up. During the attempt they cleaned up a total of 544 KG (1,200lb) of trash! Most of the trash consisted of fishing line and fishing lead. 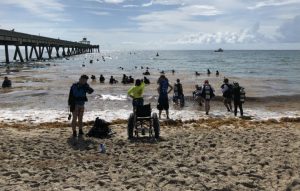