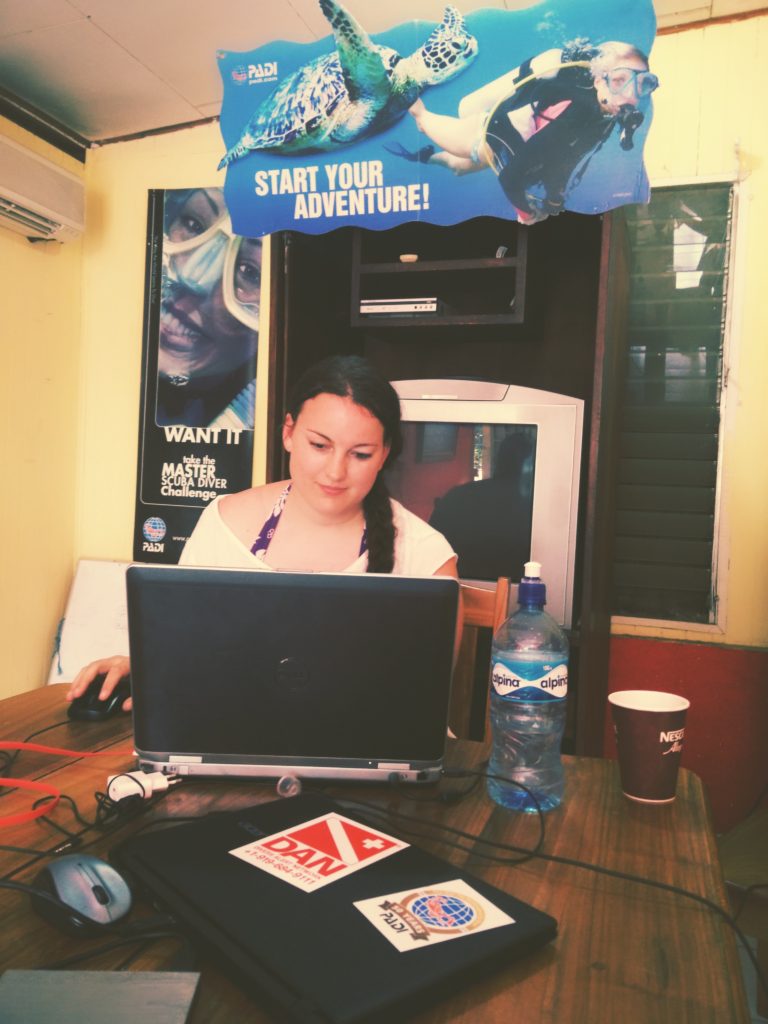 Costa-Rica, I have arrived!

Today my Divemaster Internship has officially started! In this blog-post I’ll be writing about travelling to Costa-Rica and arriving at the intern house, where I will be spending the next couple of months. Right now I’m sitting upstairs in the dive shop of Rich Coast Diving enjoying the cool breeze of the fans. Today is my second day here in Playa Del Coco. The weather is amazing, right now it is 32 C / 90 F, the humidity is around 94%. I love it.

My journey to Costa-Rica went very smoothly. I was flying with United Airlines from Amsterdam to Houston and then from Houston to Liberia, Costa-Rica. All in all the journey would take 24 hours door to door. Everyone who knows me, knows I love a bit of a sleep in… so setting my alarm for 5:30 AM on the day of departure was a rare occasion. My good friends Miranda and Ruud offered to drop me off at the airport, which is a good 1,5 hours away from our town. The journey went smoothly and I arrived just after 8 AM at Schiphol where I could check in with United Airlines. Sadly the United flight to Houston experienced a delay we were told at the gate, which got a lot of passengers worried as they weren’t sure if they could make their c 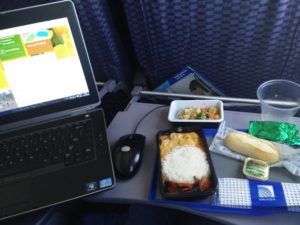 onnecting flights. At the beginning, I wasn’t too worried for my flight connection as I had around 3-hour layover in Houston, but as time passed I did get a bit worried. At 12:20 PM (instead of 11:10 PM) the flight could leave. The flight was fully packed, except for 1 seat. Guess who got a free seat right next to her? That’s right! So lucky. It was very welcome as well as I was going to be ‘stuck’ for over 10 hours. The flight was very comfortable and I was absolutely over the moon that I could purchase WiFi (17 USD for the entire flight) and had a power outlet under my seat. I spent the entire flight on my laptop working and responding to emails. It was brilliant! 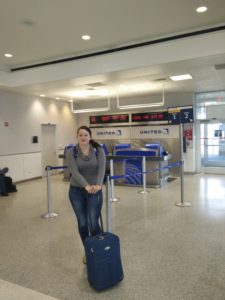 When I arrived in Houston I had 2 hours to make my connecting flight. Fortunately, I had already I applied for my ESTA for my travels to New York and Hawaii at the end of July so I could get trough customs much quicker than most transit passengers that didn’t have an ESTA. All in all, it only took me 20 minutes or so to get through. With plenty of sparetime I got at the gate for my flight to Liberia.
Because I flew both segments with United Airlines I didn’t have to recheck my bag as United had labelled it for Liberia already in Amsterdam. After a cheeky hamburger meal it was time to board the plane to Liberia. Boarding went smoothly and in no time we were on our way. This flight was a bit more basic than the previous one and sadly after we flew out of the US territory I couldn’t use the WiFi anymore. So I just did some reading, the flight was only 3 hours anyway. Slightly earlier than expected I arrived in Liberia, Costa-Rica. 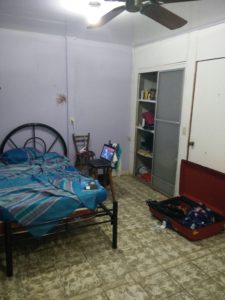 Rich Coast Diving had arranged a pick up from the Liberia airport for me. The drive to Playa del Coco went smoothly and my driver was very friendly. In my basic Spanish I was able to make some small talk which was pleasant. The weather was ridiculously hot for the time at night and the humidity, wow! I’m not complaining though, I left the crazy cold April weather behind me. When I arrived at the Intern-house there were two Dive Master Trainees waiting for me to let me in the house, Jo from the UK and Jonas from Germany. It was hard to really see the area I arrived in because it was pitch black dark. Jo and Jonas showed me my room, which I was very pleased with. A super big spacious room with a big fan on the ceiling. Besides that there were build-in closets for all my clothes and dive stuff. 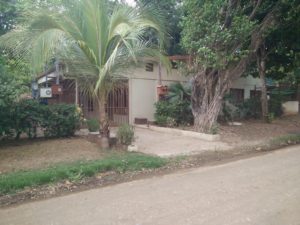 The only thing that really needed some addressing were the see-through curtains covering two large windows. With the lights on inside the room, it was pretty much a no privacy at all situation. Within the next few days, I’m going to see if I can get some cheap sheets to sort that out permanently, for now a couple of towels and such will do. The rest of the house involves another 1 person bedroom, a dorm where 3 people can sleep, a studio upstairs, a kitchen, a bathroom and a nice living room with several desks where I can study. The house also has a pretty good WiFi connection which is great, even better is the fact that the router is in my room…. Full WiFi signal!

After I woke up in the morning I met Lieke, a 21-year old Dutch girl also from The Netherlands, who is doing a Social Media internship here with Rich Coast Diving. Obviously she got also hooked on diving and she’ll be doing the 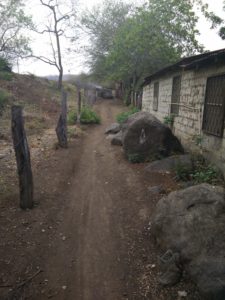 Divemaster Course with me. Lieke had the day off and was happy to show me around in Playa Del Coco. After sharing her breakfast with me, which was great because I was starving, we left for the dive shop to sort out administration involved with the PADI Divemaster Course.  The walk to Rich Coast Diving from the intern house is literally 5 minutes, maybe even less. Martha, a nice lady from the UK, was in the shop and gave me my PADI Dive Master Crew Pack. 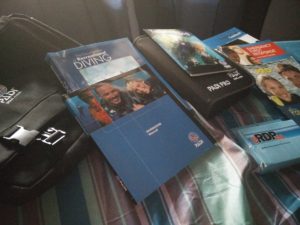 The DM Crew Pack is a strong quality fabric shoulder bag that contains the divemaster manual, an encyclopedia of recreational diving, a padi pro logbook folder and a lot more things. It also had a new PADI logbook for professionals. This was great timing because I had finished my previous log book on my last Rescue Diver dive in The Netherlands and had completely forgotten to sort myself out with new log book papers. Martha requested to have all 9 knowledge reviews ready on the 12th of May, when we start with the theory. Until then it’s time to help out in the shop and hopefully get a lot of dives logged in my new shiny log book.

After the dive shop visit Lieke and me continued to grab some nice coffees from next door and then continued our walk to one of the major supermarkets in Playa del Coco. This was a great visit, not so much for shopping, but for cooling down. The airconditioning inside the Supermercado is amazing.

The supermarket itself isn’t bad either, it’s a decent size and there’s a lot of fresh products available which I appreciate. I was a bit shocked at some prices, like 9 dollars for a jar of Nutella, but it also made sense as these are not local products. I ended up settling for a baguette and some fruity marmalade. Apparently the supermarkets have great deals on Wednesday and Friday, so I’m going back in a couple of days. I had somehow assumed local money wouldn’t be used as much as American Dollars, I was wrong. 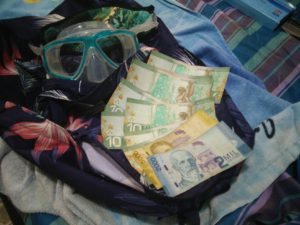 It is highly recommendable to bring Costa-Rican money, Colonnes. You can pay everywhere with American Dollars but the exchange rate will not work out in your favor. The local stores have an exchange rate of 1 dollar equals 500 Colonnes, whilst in reality it’s more like 530 Colonnes. Now mind you that means you ‘only’ lose 5 USD cents per American Dollar but hey, it adds up. Also, you will get paid back in Costa-Rican Colon, which might make the math difficult at times.

Anyways, this is becoming quite a lengthy blog! The rest of the day we spent at the beach, swimming and meeting people. We also had lunch at a nice Costa-Rican dinner (black beans dip sauce on fries = nom nom nom) on the beach and in the evening we went out with all the personnel from Rich Coast Diving because one of the Dive Master Trainees, Marti, had completed his Dive Master Internship and was heading back to his home town, Barcelona. 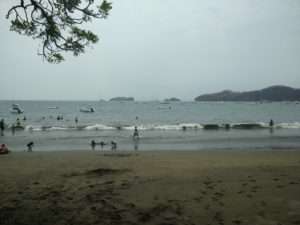 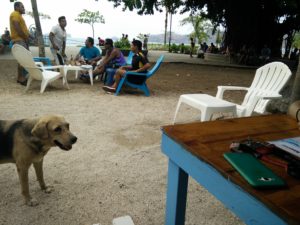 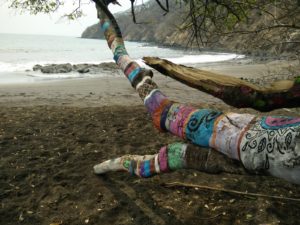