Just a couple of months ago I saw this Facebook advertisement for a hitchhiking competition to Barcelona… It immediately got my attention. Ever since my mom had told me about her hitchhiking adventures I’ve been more than keen on trying it myself.

So this competition that I saw is called Barcelona Express. A competition where money is raised for the International Tree Foundation. Three different countries participate, with as a goal to reach Barcelona the quickest. The Dutch teams start in Amsterdam and spread out over 6 days/stages are expected to reach Barcelona.

I got lucky enough to find my roommate Charlotte enthusiastic in joining me in the hitchhike adventure. We quickly decided on a team name: Happy Thumbs. This morning we left our house in The North of Leeuwarden at 05:00 to head towards Amsterdam. 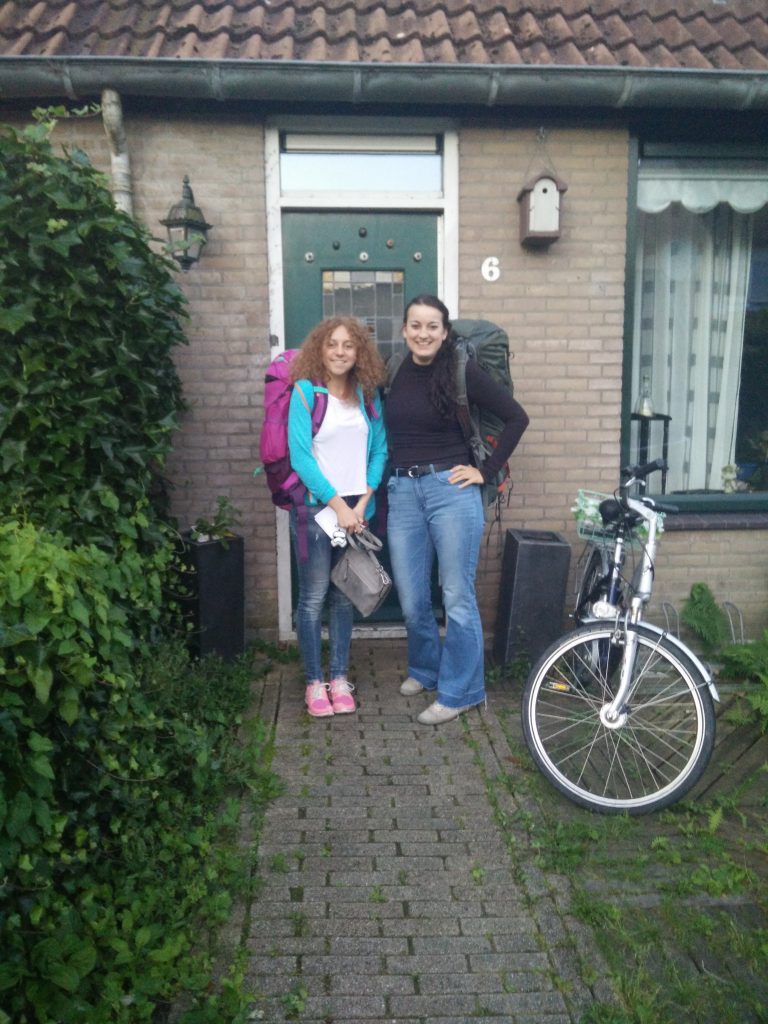 We were expected to gather at the Museumplein at 09:00. My neighbour and good friend Ruud gave us a ride in the morning. Which meant getting up slight more early but also a comfortable trip to Amsterdam! It also gave us plenty of time to enjoy a nice and relax breakfast at Starbucks. 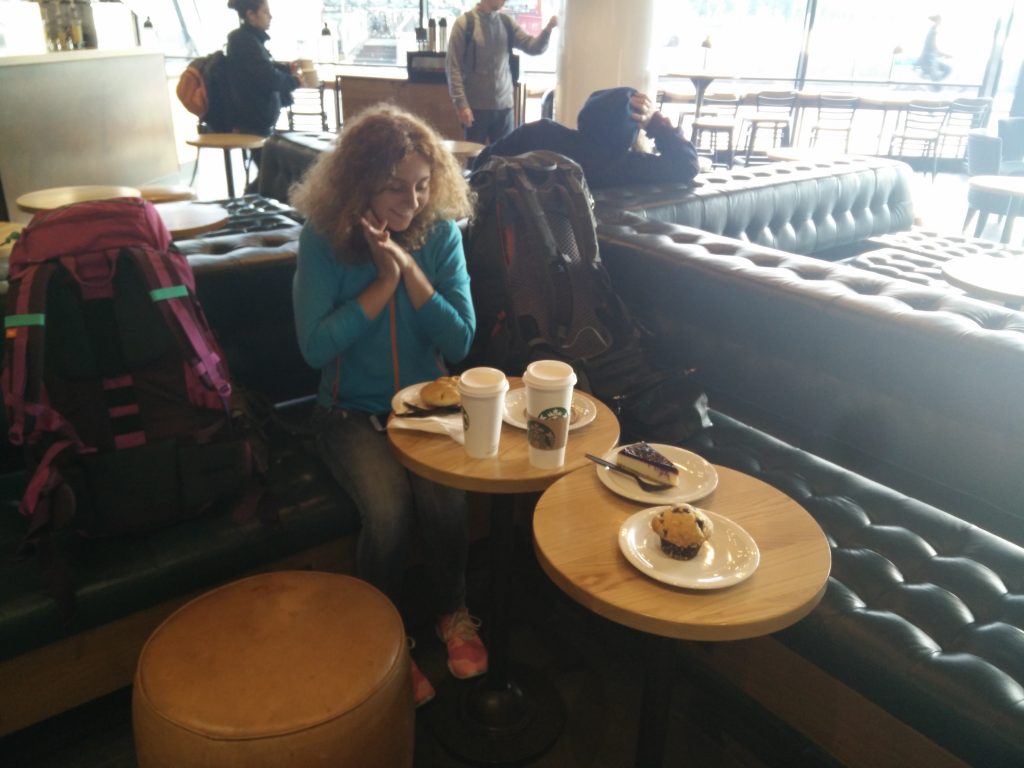 After the breakfast we headed towards the Museumplein. In my days prior I had already done some necessary research to determine the best exit strategy. For those unfamiliar with the Museumplein, it is a square right in the middle of Amsterdam. It’s not a convenient spot at all to start hitchhiking and most traffic is city traffic. 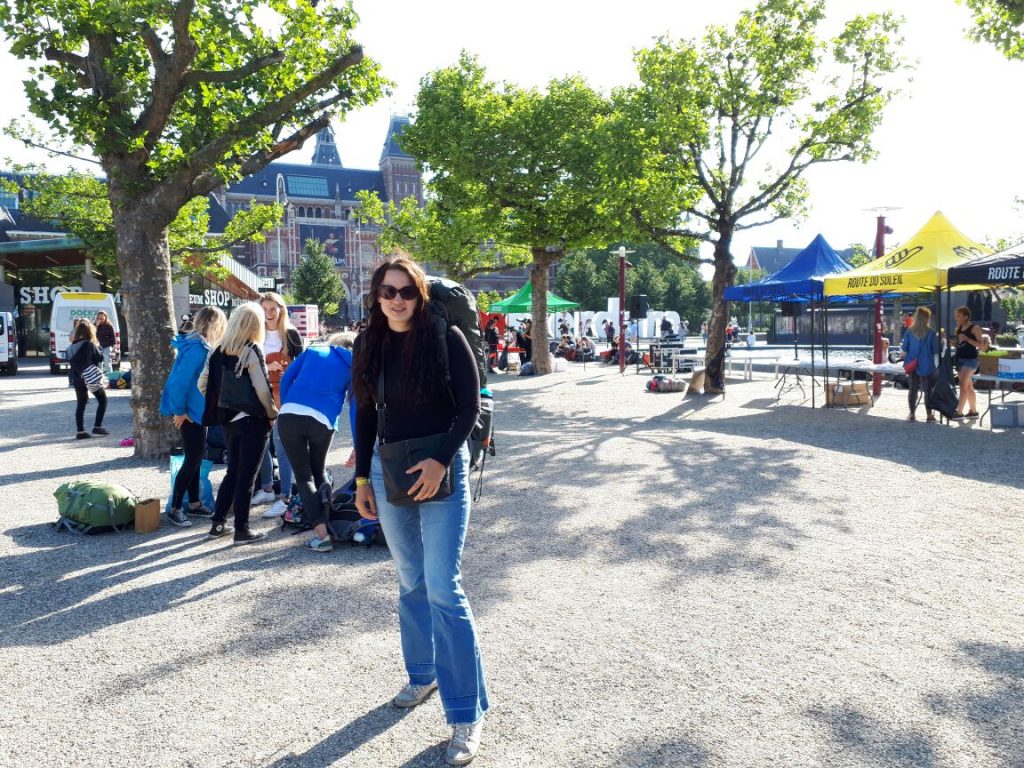 During the briefing at 10AM it all of a sudden was announced we were allowed to use public transport, but only for the first 10KM. Perfect! So my research had paid off and I knew exactly which tram to take for which highway.

After the briefing every team got handed their track card (where you register all your rides) and the destination of the first stage: Ghent!

So we took a tram, our only allowed public transport moment of the competition, and headed towards the South of Amsterdam. 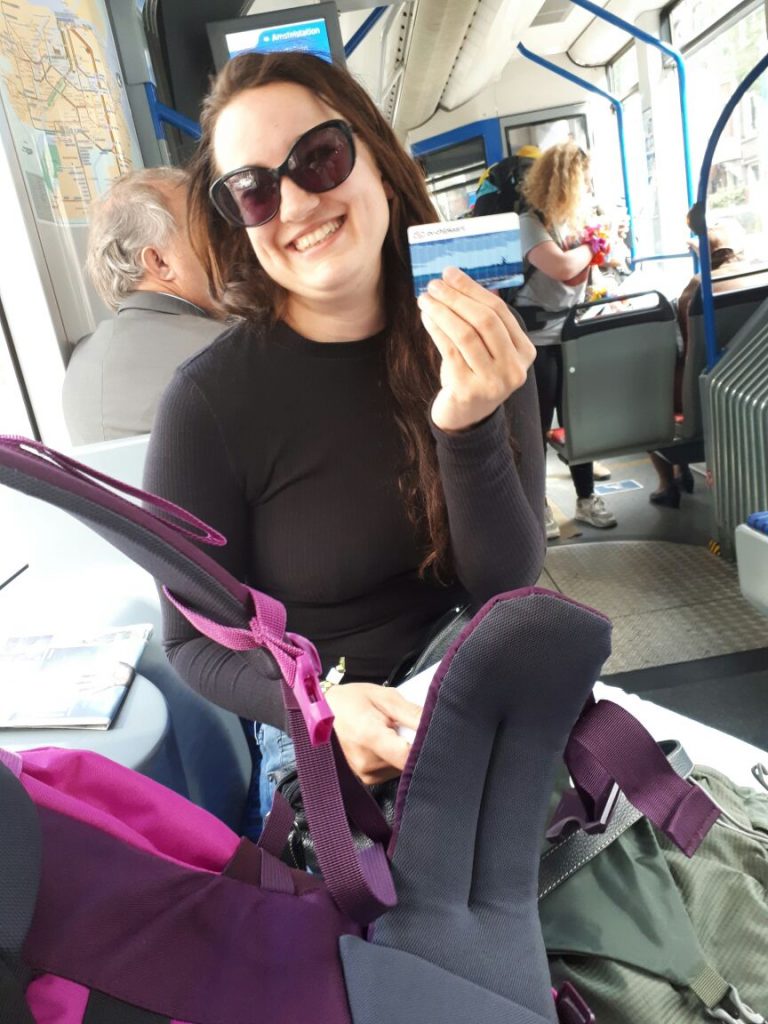 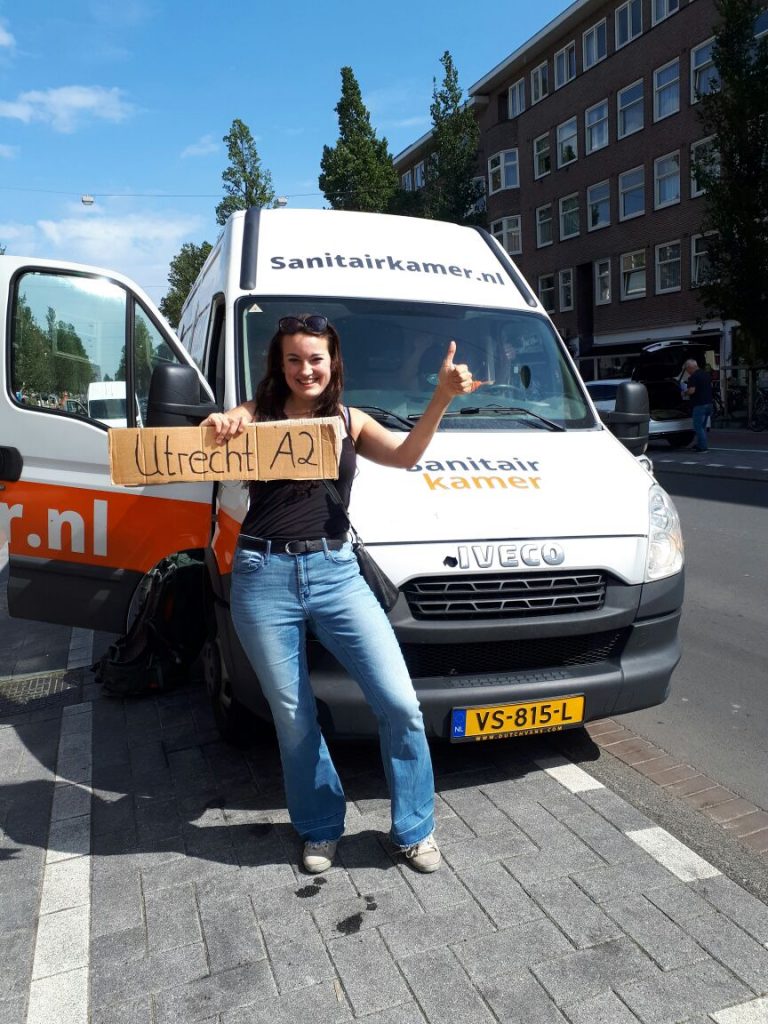 We quickly found a ride to Utrecht! A very nice guy called Marouane that worked for a company making deliveries. He initially was going to drop us off in Utrecht but as we needed to get to the A27 he offered to drop us a bit further if we had time to make 2 deliveries in Utrecht…. Sure why not haha. So we did that and then he dropped us at a big gas station right on the A27. We were on our way!

Every day the competition has certain requirements you’ve to meet to successfully complete the day stage. Today one of the requirements was to catch at least one ride in a car with a licence plate issued in Belgium. So on the parking lot next to the gas station we scouted for Belgium cars. It took us 10 minutes to find a nice lady called Ellen to take us all the way to Antwerp. 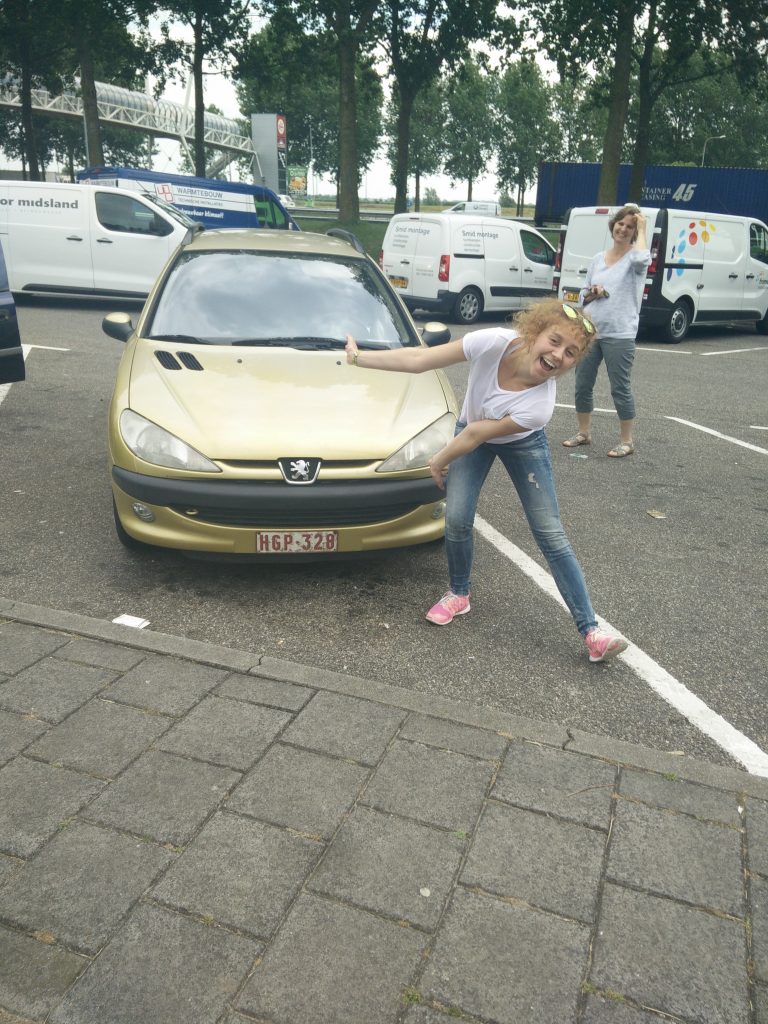 Ellen was very happy to take us AND she was happy to help us out with some of our bonus points assignments. The first one was allowing us to car surf on her car whilst it wasn’t moving…So Charlotte checked that off like a pro.

And then she was also game to be thought a Dutch ‘meezinger’ song. We went for a real classic!

After Ellen had dropped us off in Antwerp it got clear our perfectly picked spot for the next ride was very inconvenient…. It took us nearly an hour to catch the next ride. Finally a German family stopped and said they weren’t leaving Antwerp but they would drop us off at a more successful spot to catch a ride to Ghent. Heroes!! 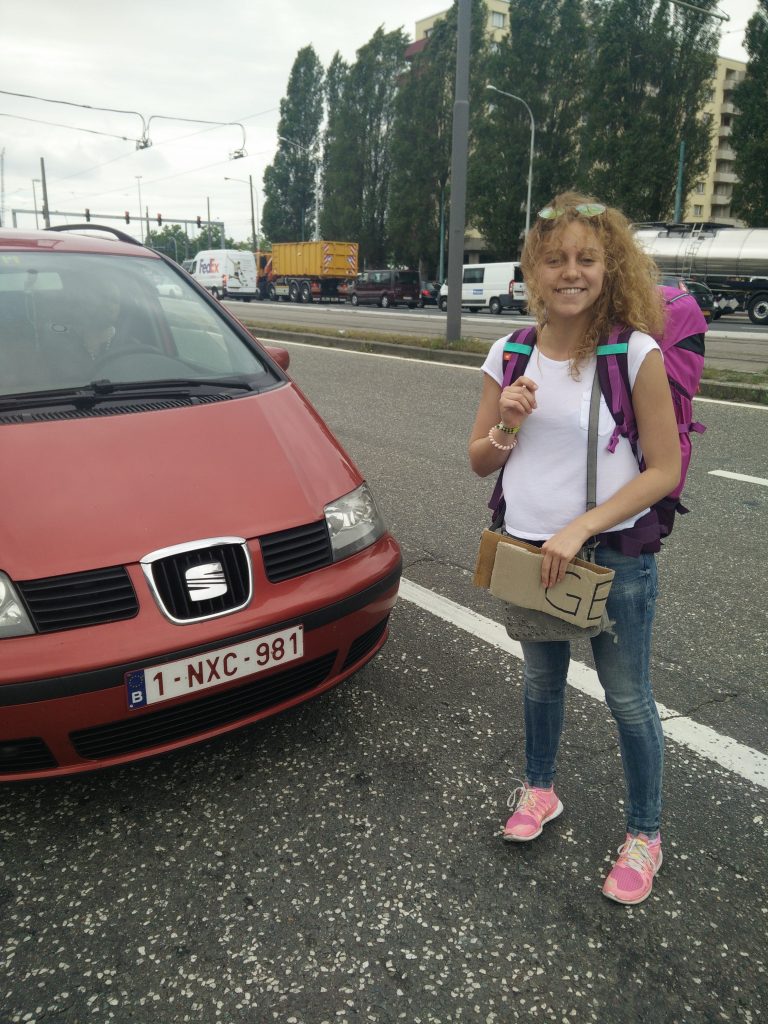 After just 20 minutes they dropped us off but from that spot we managed to catch our final ride to the camping. A kind lady called Veerle gave us a ride and offered to bring us all the way to the actual camping. Veerle was super enthusiastic about our competition. We had one more extra assignment to fulfill…. Traffic flirting… We had to get another driver in a car to blow us a kiss… Guess what… we got 2 kisses!! 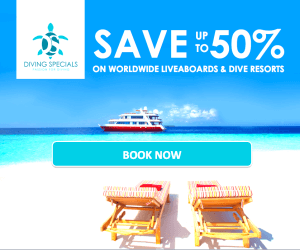