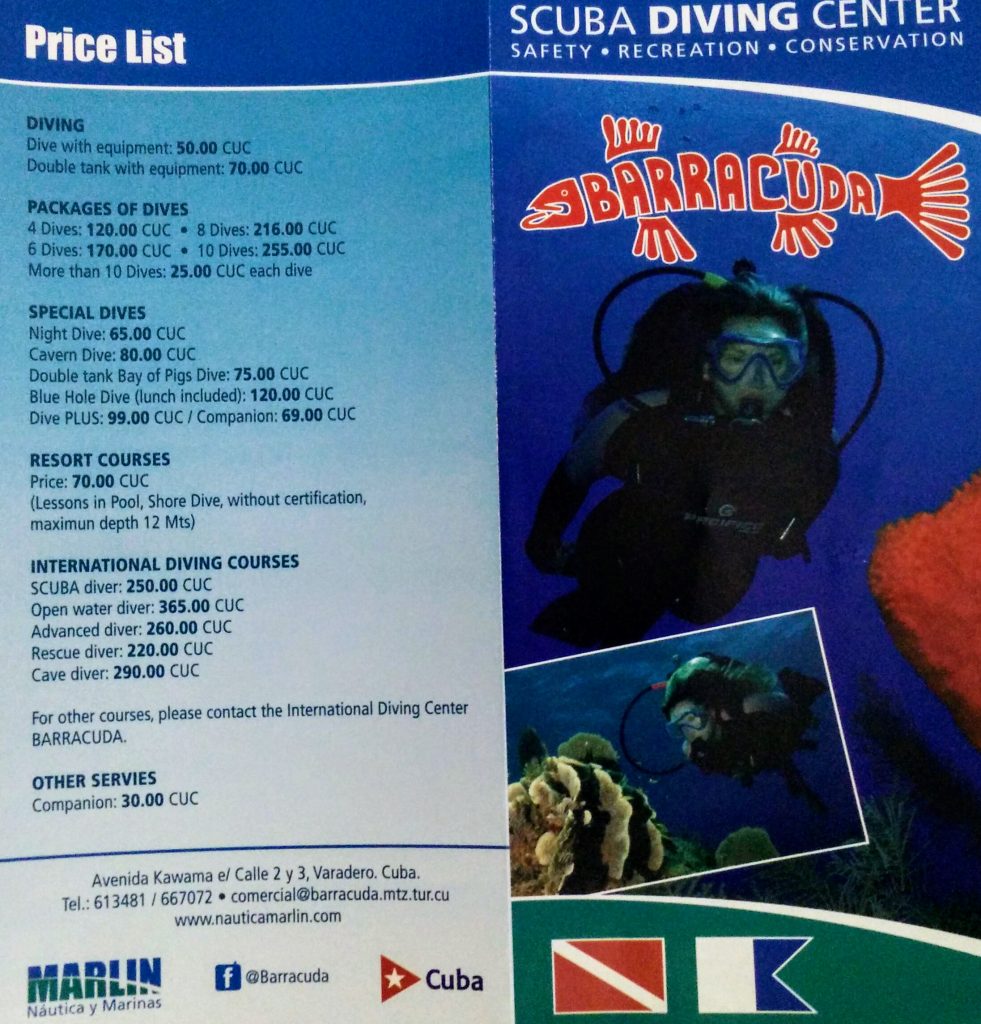 Cuba has always been a country high on my bucket list. Not necessary because of the Scuba diving but mostly because of the rich history of the country. The people who have visited Cuba in general can be split in two groups of people, the haters and the lovers.

When it comes to Scuba diving in Varadero, I think you’re dealing again with these two groups. At least after every immersion people either had a smile on their face or were highly disappointed.

With all things in life I think it’s your expectations that make it or break it. A couple of weeks before I set off to Varadero I had tried to get a general idea on what to expect. I looked at some YouTube movies, tried to find some pictures, dive logs…. But as it seems to be with most things in Cuba… It’s all a bit of a mystery to the outside world.

So I’m a bit of a planner. I like to be in full control. I collect data and plan. I may or may not have in the past sent my ‘date’ an excel file of all the options we had for an upcoming weekend trip….. Anyways, I’m also a realist. I know that my desire to map everything is not always an option.

Trying to beat the system I found a German travel agency offering packages online for Scuba Diving in Varadero. So like five days before my departure I contacted them to discuss the several packages they offered on their website. Turns out, I was way to late for contacting them. The only way I could pre-book things with them would have been at least 14 days in advance, and that would have been short notice! The only option I could go ahead and sort it out with them was to go to Havana and pay in cash at their travel agency. Given Havana is 150km from Varadero that didn’t sound like the best option for me. 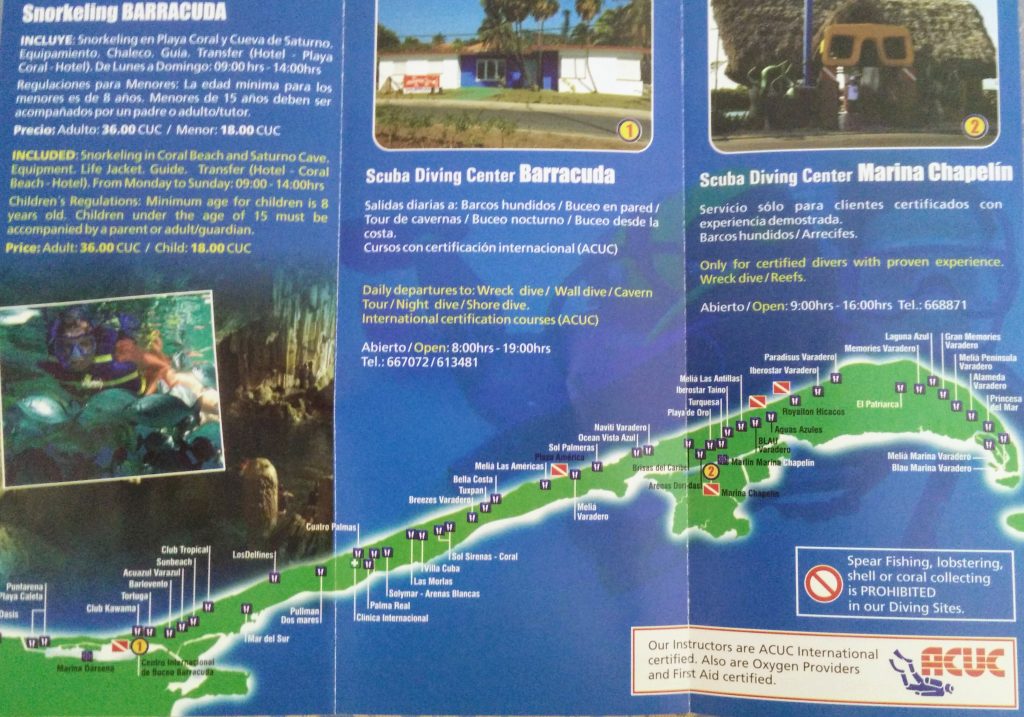 The reviews on TripAdvisor on all three were very mixed. Some reports were seriously scary, equipment failures, beginners in caves, deep dives with uncertified divers… The list of horror reviews is long. This didn’t put me off from diving though mind you, it just merely alerted me to be extra cautious.

I contacted ClubScubaAzul first because I felt the reviews on them were the better of the three. I ended up speaking with Rene from ClubScubaAzul on e-mail. His responses were quick but the price he quoted felt way too high. He quoted me 75 CUC for 2 dives, all equipment included + 30 CUC for transfers from Varadero to Mantanzas City (30km from Varadero). Which I guess is the location they were operating from as he explained they already had a group in that area.

Well at this point I was a bit desperate to sort out my dives in advance (remember I’m a control freak) and the other diving centers were simply impossible to contact or didn’t bother responding. So I just decided to pack my gear and “wing” it. Nothing booked in advanced.

Well! Winging it is the way to go! Inside my hotel was a tour operator desk that was selling Scuba Diving packages. It wasn’t with a specific scuba company it seemed. Could either be Barracuda or Marlin, the two companies I couldn’t get a hold off online. They work together and pretty much try to fill a boat together and thus safe expenses.

There were several options, all cheaper than ClubScubaAzul. Just a two tank dive trip was 70 CUC including everything, also the transfer. Sadly you do not get a discount if you bring your own gear. Besides two tank dives they were also offering packages. I decided to book a 6 dive package for 170 CUC, so like 56/57 CUC per day. 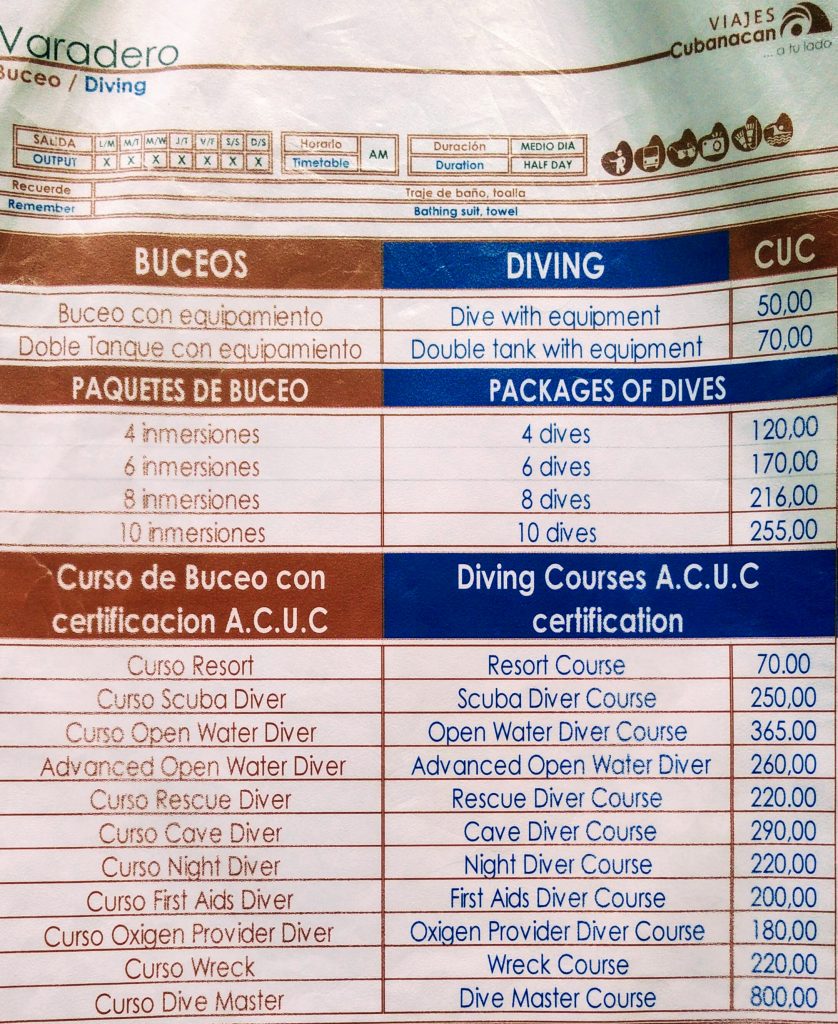 The way it works is the dive shops have a specific schedule set up per day. Where they go diving. For me it ment:

Especially the given dive schedule on Tuesday had me raise my eyebrows slightly but… yolo.

My dives were booked! I was ready to go diving. Happy days. You can read all about my dives in my detailed ‘Scuba Dive log – Varadero, Cuba’ post