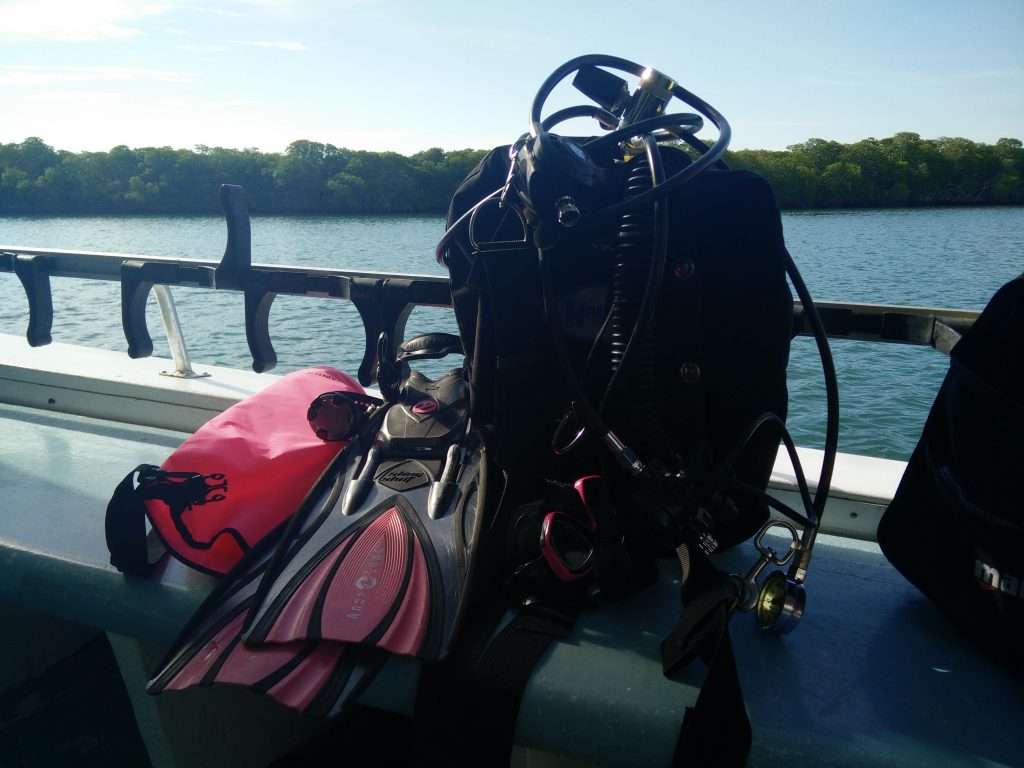 After buying a dive package in my hotel it was time to go diving in Cuba! If you want to read more about pricing and organizing please read my post:

At 8:45 I was picked up at my hotel by a lady wearing a Marlin Marina T-shirt. She collected my voucher, that I had gotten from the hotel tour operator desk and off we went to the marina! In the bus were several other divers that had been collected before me and we made a few more stops collecting a few more. We had a nice mix of people on board! All very friendly and happy to go diving.

Up on arrival at the Marlin Marina I checked in at the first window (yes, it was like a drive through), showed my Divemaster certification card, filled out a form promising I did not drink heavily the night before + had a good night sleep etc. I then received 4 more vouchers that I had to hand it the next two days when going diving. OK! On to window 2. As I brought all my own gear all I needed was weights. Well, when I say my “own” gear that’s not entirely true. I brought my buddy Christiaan’s wing to try out. So when I mentioned earlier that I was going to “wing” it… That wasn’t just a figure of speech. He he. Anyways, so as I was new to the wing equipment and had lost a fair amount of weight myself in the last 4 months or so I decided to play it safe a go for 4kg. I received beautiful weights with rubber protection around it to protect the wing pockets. It was lovely. 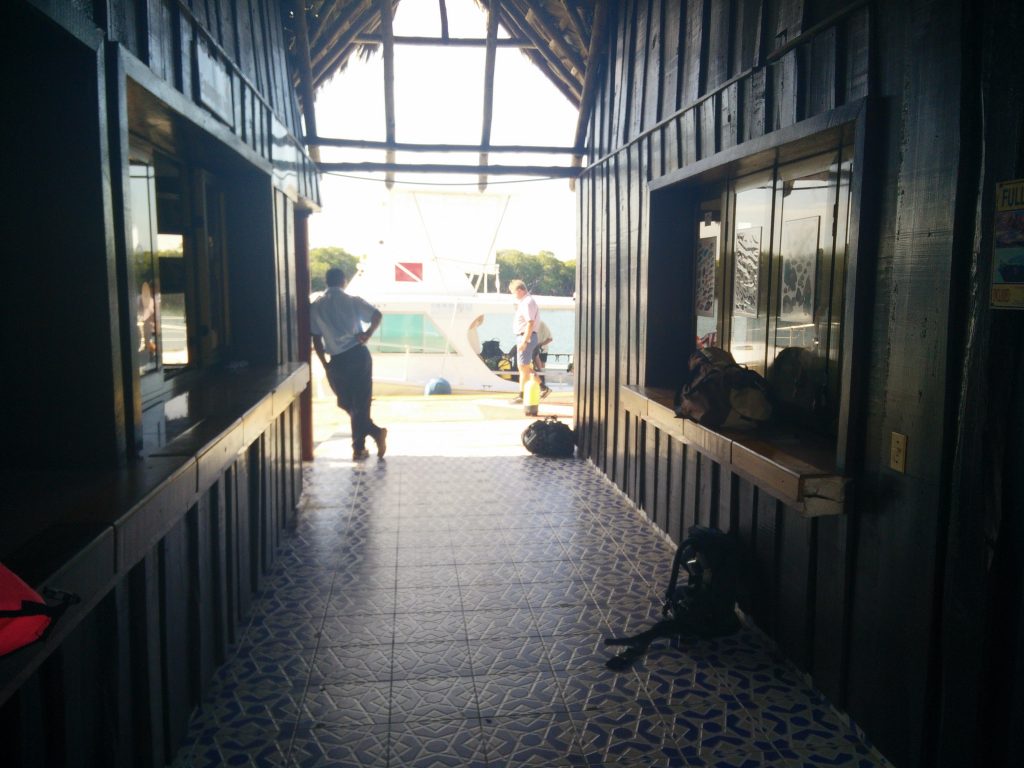 My first impression of the dive center was really good. The equipment looked nice, the people were friendly and seemed to know what they were doing… All good.

In Cuba they use INT mostly and as I brought DIN they quickly had to get me DIN bottles. That was sorted out and everyone was asked to set up the equipment on the dock. Check check done. 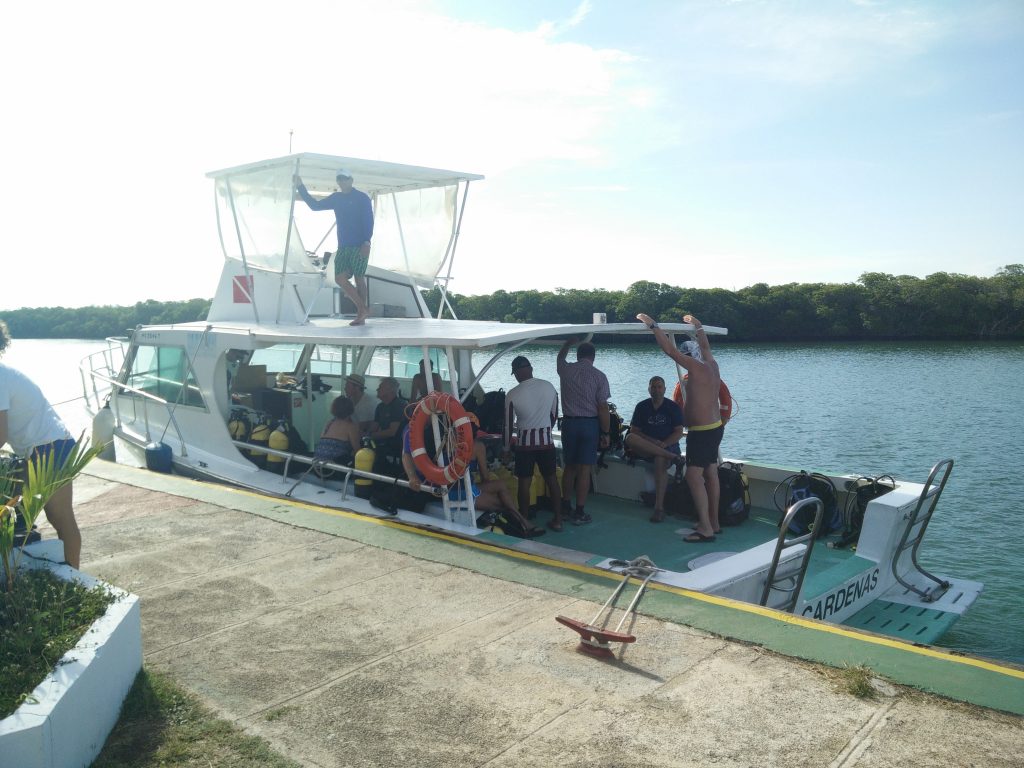 Off the boat went to the first dive site. A very short dive briefing was done, which I think could have been a lot more detailed. And then they made two groups. A “beginners” and and “advanced” group. I was in the advanced group. In a way it’s somewhat hilarious we had a beginners group on a 30m wreck but hey :p

Our group went in first, the Russian PB-383 wreck is a lovely big wreck which stretches out over 110m. The descend went smoothly, and the visibility was all right. I’m horrible at estimations but roughly 20meters I want to say. The deepest I’ve gone on the dive was 25,6m and down there it was still a nice 27C. So no complaints there! I was diving in a 2mm skin.

25 Minutes into the dive the people I was diving with were down to 70 bar. I won’t lie, this annoyed me greatly, not because some people go fast through their air, but because they had been soooo busy under water… Struggling with buoyancy, picking things up, touching the wreck, diving deeper where there was nothing… Just not sensible diving! At that point I still had 140-150 bar and was not quite ready to ascend. Fortunately for me, the beginners group passed by and they still had plenty of air, so I switched groups. After a nice 42 minute dive I ascended with the “beginners” group. A very nice first dive completed.

On a personal equipment note, turned out that 4kg of weights was wayyy to much so I got rid of 2kg for the next dive. I also don’t think it was really helpful I had a steel short 12l tank instead of a long 12l tank weight spread wise. But they don’t have any other kind than 12l Steel short… So…

For the second dive I’d had switched groups as that made a lot more sense air consumption wise. We went to a fairly shallow reef that wasn’t really spectacular but hey when I’m scuba diving, I’m a happy mermaid. I did also see the biggest lion fish I’d ever seen, so that was nice. The maximum depth of the dive was around 12,5 meters.

Annoyingly also this group seemed to be keen on touching aquatic life. Two guys kept picking up conch shells and most didn’t give a rat’s ass about kicking coral with their fins. It was painful to watch their ignorance. The instructor didn’t say anything about their behavior and I honestly didn’t know where to start correcting all this. It seemed a cultural thing almost. I was in no position to correct them and it honestly would have been a lost cause. It’s moments like these were I think back of my time at Rich Coast Diving in Costa Rica and respect the management and instructors so much for not allowing anything like this ever to take place! All these divers would have been kicked off the boat if they hadn’t changed their behavior immediately. 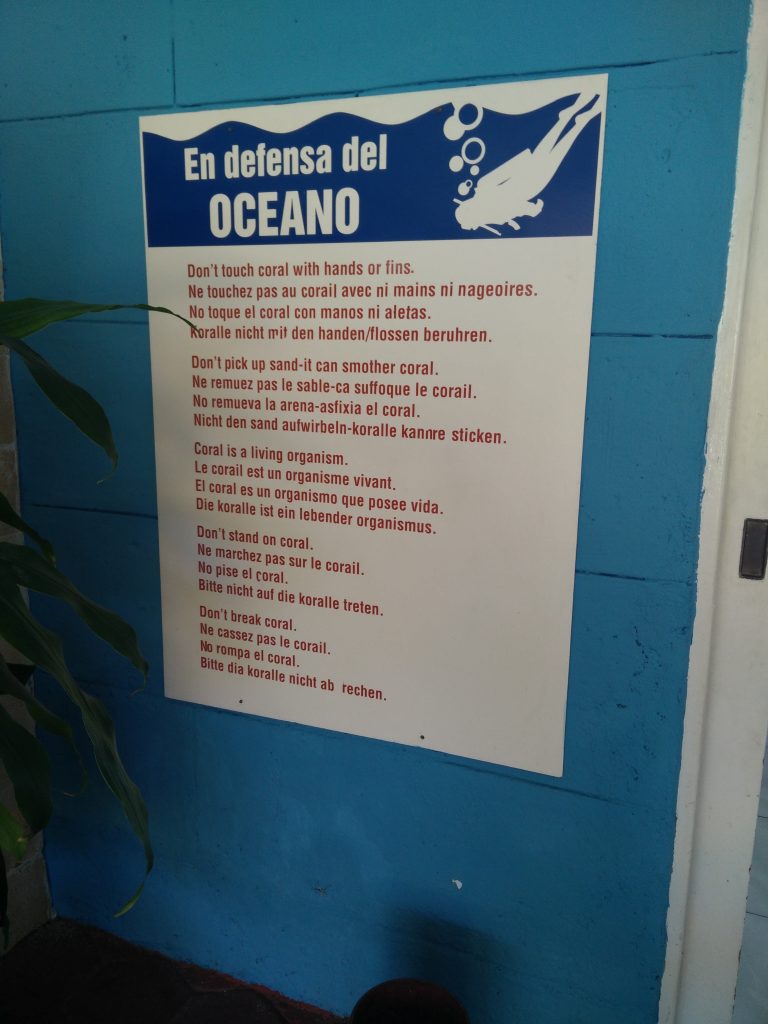 After a 54 minutes we ascended and I could conclude that even the 2kg weights seemed a bit much… Could I go down with no weights at all I wondered…. Tweaking tweaking…

We drove back with the boat, which took approximately 30 minutes ish and after everyone had washed their gear we drove back in the bus. Which took a bloody hour as they had to stop at like 9 hotels and mine was last so I missed lunch! In the end I was back in my hotel at 14:40.

Again we went to Marlin Marina, this time all I had to do was hand in 2 of the coupons I had received the previous day and off I went to set up my equipment. This was done in 10 minutes and then I just started chatting with the divers on board. 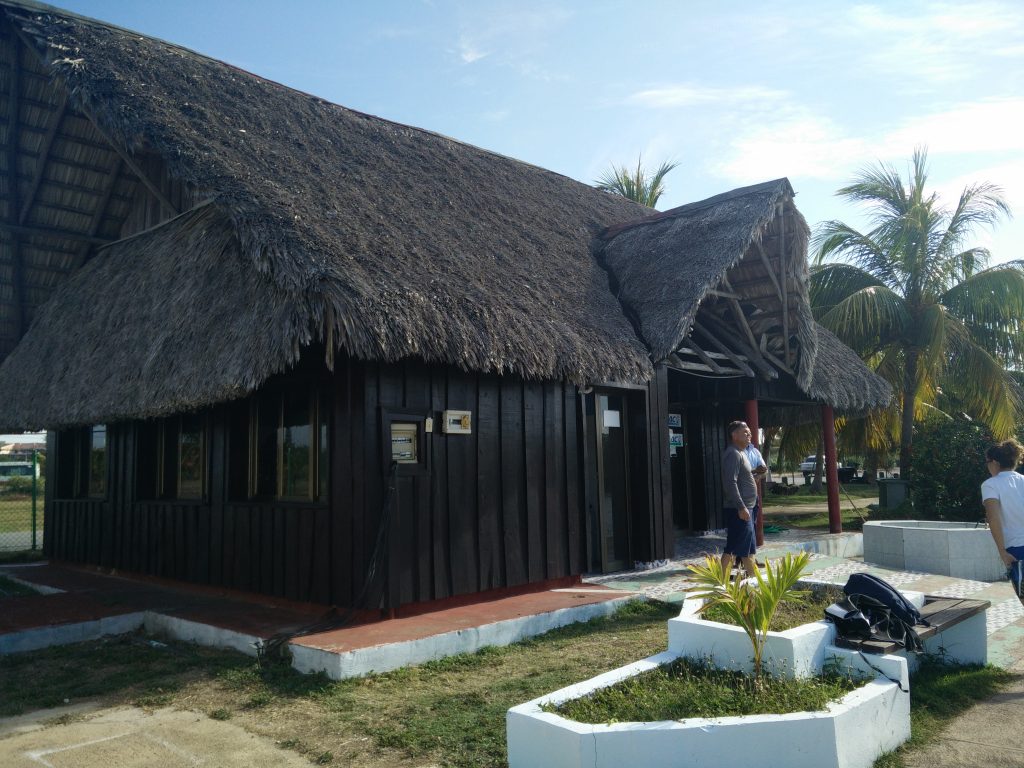 It took ages before we left, finally we did and within 20 mins or so we had reached our first dive site.

Neptune Wreck is a nice wreck but nothing spectacular, it’s shattered all around the ocean floor which makes it a great place for aquatic life to shelter. For the entire duration of the dive I spent my time looking into gaps and holes trying to see what was there. I seriously regret not bringing a flashlight… The maximum depth of the dive was around 10,3 meters and the bottom temperature 27C.

The most exciting animals I encountered around the Neptune wreck were a Scorpion fish aaaaaaand my first Nurse Shark!! Hurray. They’re so cute. Most of the divers didn’t see him because they were too busy again picking up conchshells and feeing fish from a bottle they had stuffed with bread (what the ****?!?). Anyways… No nurse shark for you suckers 😉

Oh and, descend with no weights! Woohoo, stoked about that. Though I haven’t gotten my tank under 90 bar yet and I really should test this properly with a 40bar tank to see what it does to the buoyancy 🙂

Again, not the most exciting wreck, but I think after you’ve done dives on wrecks as the Thistlegorm & Rosalie Muller you just get spoiled. There was a nice curious green turtle with a super bright shell that nobody else saw but me… Which is bizar as it swam around us for a good 5 minutes but okay and a big green eel… But I don’t really like eels so I avoided that :p

The wreck itself is in tact and you can technically enter at two points but I’m not sure I would recommend it. I penetrated it vertically without getting inside “inside” just so I could look around for 360 degrees and ascend again without ever having something above my head.

As we started late, we ended late. I was happy I’d brought some snacks with me this time that I had taken from the breakfast buffet at my hotel. Cookies and pineapple. They offer water and drinks on board. Water is free, drinks are like 1 CUC and you can also buy a lobster lunch for 12 CUC if you want. Which actually looked really good, but I didn’t try it. It is also advisable to bring your own water as apparently sometimes they don’t have it.

Soooo initially the dive schedule that I was given said today would be another day of a wreck and a reef. This was wrong. Today I actually was picked up by the other dive center, Barracuda. I was supposed to be picked up at 08:45 again but that turned out to become 09:20… Cuban time aye 😉

Both the dive sites we were doing were located in Coral Beach.

Where as Marlin Marina is located almost at the end of Varadero, to the East. Barracuda is located allll the way to the West. The dive shop looked nice and tidy and the equipment looked all right again. Bunch of brand new Mares BCDs for example. Quick check in, all I had to do was hand over my coupons and off I went, setting up my equipment on the docks. I had to ask for a DIN bottle and it was brought quickly. 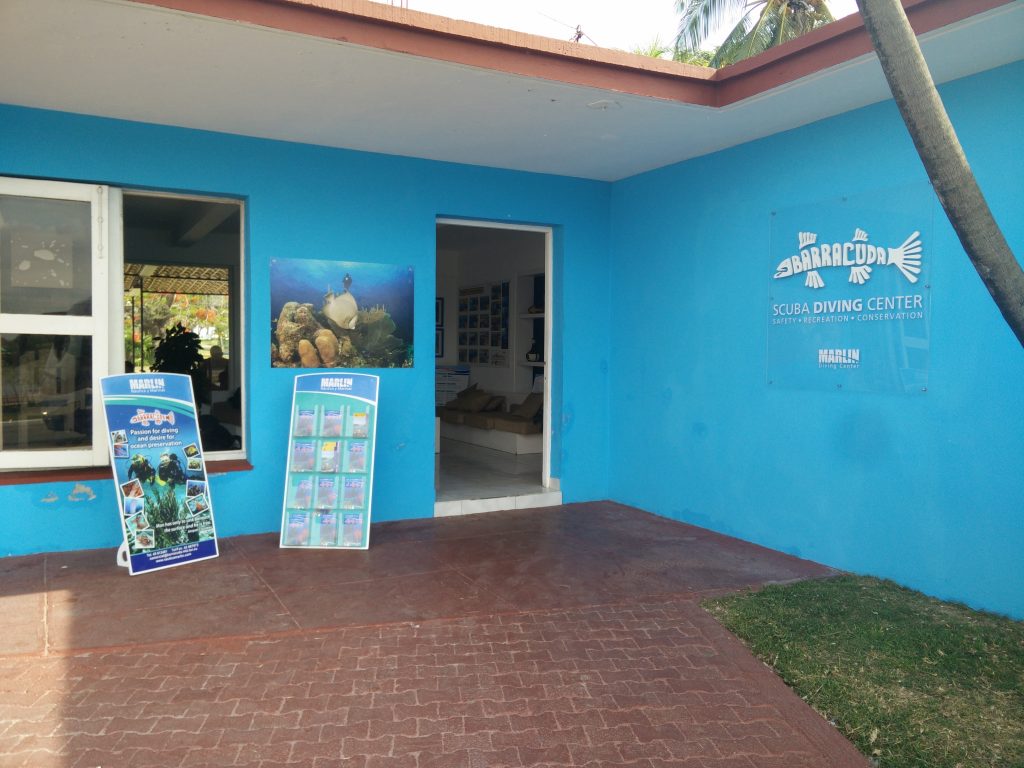 On board I did have to ask them for another DIN bottle for the second dive and at first they couldn’t tell me if they had it. One of the instructors made a remark (joke?) that I’d have to dive with the same bottle twice, in Spanish, to the other instructor… Not really that funny as there was no way I was going to use their equipment with all the stories I’d read about regulators failing… (Though again, so far the equipment I’ve seen is in good condition) So asking again they finally answered and sorted it.

The Ancla dive was gorgeous. I was pleasantly surprised by this dive. Lots of little “coral streets”, gaps between the coral/rock that you could dive in between off and rich aquatic life. It was quite warm as well, 28C and the deepest I’d gone during the dive was around 16,5 meters. It was a great relaxing dive!

After the great Ancla dive this site was a bit disappointing. There was just nothing special… But again… Me scuba diving = a happy mermaid. A nice lengthy dive as well, 67 minutes. Depth; 11,7meters and again bottom temperature about 28C.

Also with Barracuda you could buy lunch on board. 10CUC for fresh Red Snapper and 15CUC for the Lobster… I’d brought my own lunch again from the hotel though… Mermaid on a budget and all that. Water was free and available. 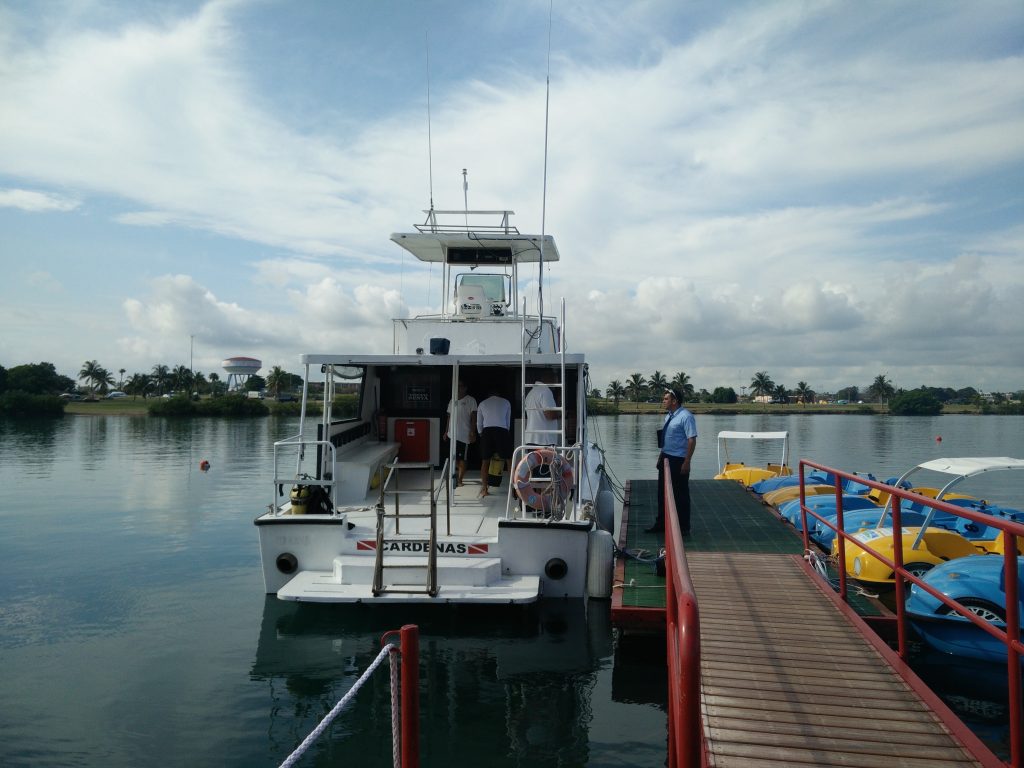 Conclusion of diving in Varadero:

Do it! It’s a great adventure and there is plenty to see. Don’t set your expectations to high and just enjoy the experience. If you can bring your own gear, but know the prices include the use of all their gear so if you want you can travel light. If you do use their gear, inspect it ! Do not assume it’s in good shape. Barracuda and Marlin are all right, sure I’m not happy about the disrespect to the aquatic life by the clients but in general they’re all right. The boats are comfortable, the dives are lengthy’ish, they staff seems knowledgeable… And in my case all the pickups and drop offs went smoothly’ish as well. I’m planning to give both these dive centers a positive review on TripAdvisor as I believe for Cuban standards they delivered quality.

I do like to stress to everyone diving in Cuba to take full responsibility for your own diving, attitude, knowledge and equipment. Nobody else will! 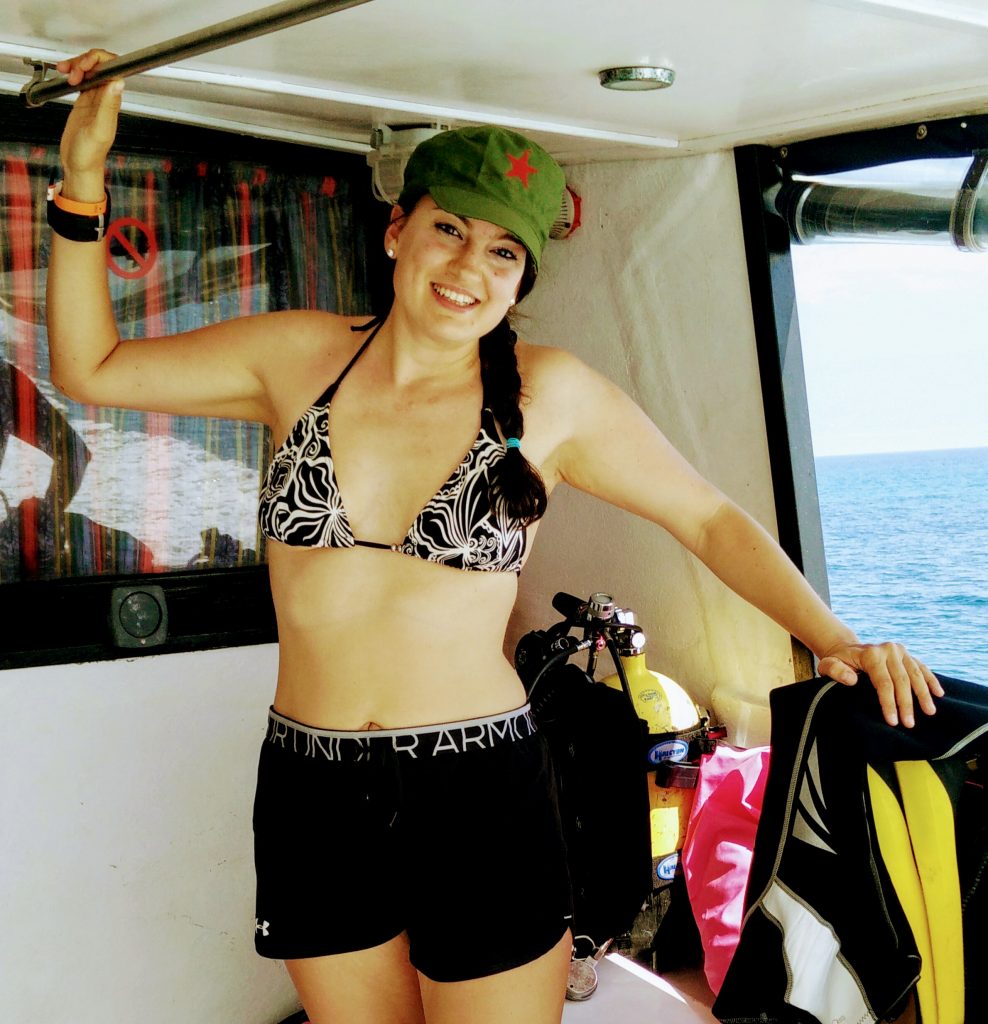