Today, the 8th of June, is World Ocean Day. A day where everywhere around the world people commit to cleaning up our oceans and beaches, a great initiative that is sadly very much needed. It always saddens me greatly when I see trash on the beaches or in the water during my dives. Whenever I can, I pick up the trash. Pollution is absolutely good for no one, first of all it literally kills our planet and oceans… and it makes our planet ugly.

The good news is, more and more individuals and businesses are aware of the problems we’re facing with pollution and they’re working together to deal with the problem. An example of this are the beach & ocean clean ups organised by PADI’s Project Aware. But also everywhere around the globe clean-ups are organised by individuals, div eshops or as a joint effort between local businesses. Because let’s be honest here guys, an ugly beach is bad for business and tourism! 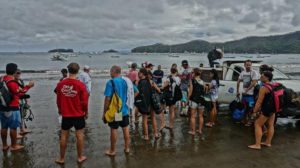 Organised by passionate individuals a clean up in Playas del Coco was organised. Of all the beaches I’ve visited, Playas del Coco is one of the cleanest I’ve seen. Whilst diving and walking on the beach, there is some pollution but it’s minimal compared to some other places. With Venice still being the worst place I’ve seen. Having said that, there was still a lot of plastic and trash on the beach and in the water that obviously did not belong there. The turn out to the clean up was amazing, I want to say over a 100 people to walk the beaches for clean up and roughly 50 divers? The dive shops helped greatly by letting people borrow dive equipment, tanks and getting their boats available. With Rich Coast Diving we went to two dive sites with 10 divers total. The biggest pollution we could find where fishing lines.

5 Things you can do to keep our oceans clean

It might be hard to imagine, but even if you don’t live right next to the ocean your behavior can have a bad or good effect on the conditions of our oceans. By following these tips you can make sure the effect is a positive one!

1. Minimize the use of plastic (bags)

Right, so this is probably not a new one for most of us, but a very very important one. Our oceans are filled with plastic. Plastic and plastic bags kill marine life, it’s that simple. Only two months ago, 13 sperm whales washed up on the shore in Germany…. dead. When they did a necropsy on them they found lots and lots of plastic in their stomach, including a 13-metre long fishing net! Why do they eat the plastic? It’s in their environment and they don’t know what it is. What I learned from my Turtle Awareness Specialty is that at least turtles can’t tell the difference between Jellyfish and a plastic bags. For turtles a Jellyfish is a great snack, they absolutely love Jellyfish, it’s like popcorn for them. So the turtles get confused and end up eating the plastic bag. By using cotton bags, a cup instead of a pet bottle and re-using the plastic you can make a difference.

Shrimp is one of the most popular seafood world wide. Sadly, fishing for shrimp usually comes at a great cost. The method used to catch shrimp has a lot of by catch in the nets. And no just a few fishies here and there, no, dolphins, sharks, turtles and rays. They use fishing nets as big as a football field and anything that just happens to swim in the net end us as by catch and quite often doesn’t make it. Even if they throw the bycatch back in the ocean, it’s quite often too late. Did you know sea turtles need to come up every 1-2 hours for air? Well, they can’t when they’re stuck in a net and the same goes for whales and dolphins… they need to surface to breathe….

3. Clean up your trash and other’s trash

In a perfect world everyone would clean up their own trash…. reality is that this is not the case. We can all stand at the side line and point and accuse or just show the right example. When ever I do a beach walk here in Coco I bring a bag to collect any trash I see on the beach. People actually ask me what I’m doing often and when I explain they seem to really appreciate my efforts. If I only inspire 1 person with my actions, that person could inspire someone else. Make it a positive spiral instead of a vicious circle. Oh, and even if you live miles in land…. you’re still connected with the ocean through rivers and what not. We all need the ocean to survive.

For divers; Always bring a knife with you! Not just so you can cut yourself loose in case you get entangled but also to cut away fishing line that quite often gets entangled with corals. If you don’t want to damage the corals by pulling the line you quite often will need a knife to cut around it. You can buy knife for less than 20 USD, a good investment!

Wheather it is by getting your wallet out or actively participating, support individuals and organisations trying to clean up our planet. Surely not everyone can afford to just pull out some notes, but surely you can spend an hour for a beach clean up every now and then? Or even help organize the event by signing up people, finding sponsors or organising a party afterwards to celebrate a day of cleaning. Anything that has a positive effect contributes!

The picture below is of my first Clean Up Dive that I joined in Bonaire. It was a great experience to work together with so many passionate divers to clean up the Ocean. Dive Friends Bonaire organises these clean-ups every 2 months and they donate tanks and weights to all divers. Afterwards there’s a barbecue, a great experience that is very rewarding!

Allright, let’s be honest. It’s impossible to not use any plastic in your life, well technically it is possible… but let’s be realistic. So what we need to do is just make the best of it. If you like to drink water from a bottle, buy a bottle like the Dopper bottle. This company has the right vision when it comes down to the enviornment. Bottles like these can be used for literally years and it’s a lot cheaper as well than buying new pet-bottles constantly.

And now, for the best part, did you know you can recycle plastic? Yes you! I mean, I recently learned from a Divemaster Buddy that the best would be to re-use plastic in it’s current state but if that is absolutely not possible… then you can recycle the plastic and make something new yourself! Watch this Youtube movie, created by fellow Dutchie Dave Hakkens from Precious Plastic, to see how you can now make a difference! I personally think dive shops all over the world should look into this! If you can recycle the plastic your collect during you clean up dives and then fabricate like water cups for on the dive boat, a key chain as a souvenir etc from it…. how amazing wouldn’t that be? Seriously guys, get on this!